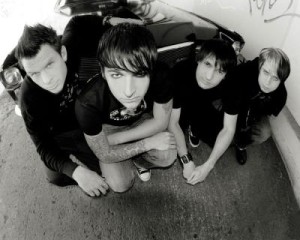 After an eight year hiatus, Bleed The Dream has reunited. The band is reuniting with four of its original members. The bands original drummer Scott Gottlieb passed away in April of 2005 from leukemia. You can read the press release below.

Los Angeles, CA – After experiencing the highest of highs and the lowest of lows, and an 8 year hiatus, Bleed The Dream has reunited with all original members – Brandon Thomas, Keith Thompson and Dave Aguilera. Late drummer Scott Gottlieb, who passed away from Cancer on April 10, 2005, will be there in spirit and is the main motivation of the reunion.

The remaining band members had this to say:
“We have a really special surprise for fans. We are going to record a new album in tribute to Scott and have a special replacement planned to take his seat. We tried our best to find someone who played similar to Scott, as well as someone that’s playing was what Scott would have enjoyed.

“It’s been 9 years since we have all walked into a recording studio together to work on a new record. This album will be the darkest, most passionate, and heaviest to date, with a fall release and tours to follow.”

In honor of Scott, BLEED THE DREAM will donate a percentage of the profits from the new album to cancer research and to family members with loved ones currently fighting cancer.

You can keep in touch with the band, check for tour dates, and record release info at:
https://www.facebook.com/BleedTheDreamOfficial