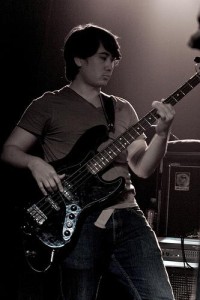 Parachute have made an announcement on their Facebook page that bassist Alex Hargrave has decided to leave the band due to health problems and family obligations. The bands friend Jon Soderholm has been filling in for the band since the summer. You can read the bands statement below.

ANNOUNCEMENT: As many of you know after seeing us on the Meant to Be Tour, Alex hasn’t been playing with the band for quite some time due to some family obligations and health issues. Many of you asked about him and also met our friend Jon Soderholm who has been filling in on bass since the summer.

It was a wait-and-see decision, but Alex has decided that now is the right time to officially part ways with the band with start of a new album and tour on the horizon.

While we are extremely sad to see his time with the band come to an end, this is thankfully not the end of our friendship. We love him like a brother and we’re happy to have his complete support and encouragement as we move into the new year. We will miss him, but we hope you join us in wishing him the best.

We can’t wait to share all the stuff we have in the works for you all. It’s going to be a great year for new music and we hope you’re excited too!