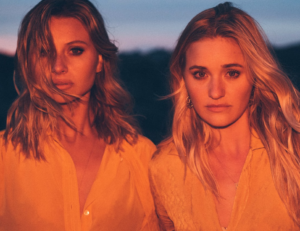 After a 10 year hiatus Aly and AJ are back with a new song and music video for “Take Me.” Commenting on the video, director Alex Ross Perry and the sisters said the following.

“When Aly and AJ reached out to me, blind, on Instagram, I assumed there had been some mistake. Nobody I had ever met before could possibly want to work with Sean Price Williams and myself badly enough that they would fly us to Los Angeles and agree with our insane idea to shoot a music video on standard 16mm film. Turns out, this was just a sign of their collaborative nature and the beginning of a process that creatively volleyed back and forth, much like my back and forth flights across the country.The opportunity to shoot in Los Angeles for the first time, in a wonderful location that I could never dream of having access to (and just up the road from the house where Sharon Tate was murdered) was one I couldn’t imagine passing up. Shooting a vampire themed video is difficult for somebody like myself who ceases to function after eleven p.m. but the enthusiasm and positivity of Aly & AJ motivated the entire crew and resulted in a video full of images I am incredibly proud of.”
AJ says, “This is just the start.” Aly and I felt personally discouraged by music in general.” “We still had so much to prove to people, even though we had made a mark in the industry. It honestly was overwhelming. People have been wondering what took so long – and it sounds horrible – but music became an enemy to be honest. We were scared to write, we didn’t like what was coming out of our instruments – it felt like we weren’t going anywhere.” Once we were able to embrace who we were and once we started writing again these last few years, we were able to find the direction we naturally lean.”