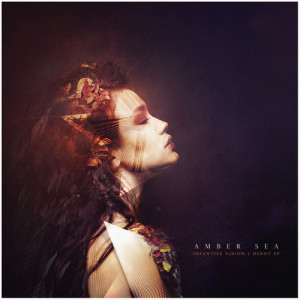 The new EP from French progressive metal band Amber Sea titled Infantile Vision, is an explosive release filled with catchy hooks, blistering growls, and melodic vocals that demonstrate that Amber Sea is one of the most promising new bands to hit the music scene. While Infantile Vision is not a long record, each of its five tracks pack more punch than many metal albums released recently. The release kicks off with “White Materia: Sideral” a track that deceives the listener during its introduction, as we hear a relaxed piano driven intro with drummer Guy Tornel playing a laid back fill that feels like he’s setting up the song to explode. While the track does blowup, the band also has a good handle on writing great melodic parts to their tunes, while also writing parts that are very punchy.

The record’s third song “Violette” is another gripping track that features guitar riffs that are incredibly intricate, while not only demonstrating the bands talents, but also how difficult metal is to play as a genre. While vocalist and front man Matt Rouland is an excellent screamer who brings immediate emotion to the song, he also has a decent singing voice when he plays up the harmonious aspects of the band’s songs. While Amber Sea is a great progressive metal act, the changes between the softer and heavy aspects of the record are very abrupt, and is Infantile Vision’s only flaw, as it would been nice to hear these parts of the song be more musical.

Infantile Vision ends with “Black Materia: Meteor” which features Pierre Dane of the band Kadinja. The track doesn’t point to a new direction for the band, though after the song ends, we realize just how good Amber Sea is as a unit. For anyone who isn’t a fan of progressive metal or the genre in general, you won’t find much to enjoy about Amber Sea, but for anyone looking for a fresh and exciting metal band, Amber Sea will certainly satisfy their search.