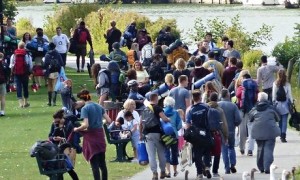 The Guardian is reporting that a 31 year old man and 14 year old boy have been arrested on suspicion of raping a 19 year old woman at the Reading festival in London, England. So far, police have reported 21 crimes at the festival since Wednesday, including 5 drug offences and 13 suspected thefts. The festival which will feature acts such as Arctic Monkeys, Blink 182, and Paramore began today (August 22nd) and goes until the 24th.