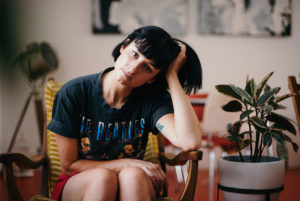 Batts has released the music video for her new single “Shame” which you can check out below. Commenting on the videos visuals, Batts says,“Thematically we were after a sliding door effect of having two separate outlooks/moods and the outcome that each one has on your happiness.”

Batts has two more singles coming out this year, and will be releasing her debut album in 2019.