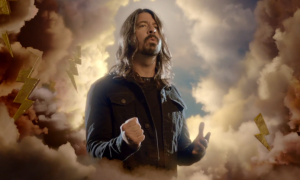 Earlier today the BBC aired a cover of “God Only Knows” by The Beach Boys to launch BBC Music, which focuses on innovative partnerships and new programs to strengthen the BBC’s commitment to music. The cover of the track featured an 80 piece orchestra and featured such musicians as Dave Grohl, Lorde, One Direction, Elton John, and Kylie Minogue. The song will eventually be released as a single for the BBC’s Children In Need program. You can watch the music video here.