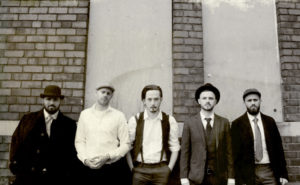 Welsh rock band Calling Apollo has released their new single “Obelisk” from their upcoming EP The Great Depression: Act 1, being released on August 19th. This EP is the follow up to the group’s latest EP Hunter | Gatherer. The band will also be going out on tour to support the release with Rory Indiana. You can see the dates below.