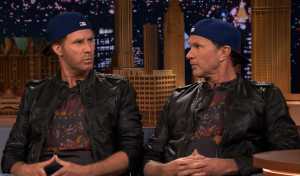 Back in May, Red Hot Chili Peppers drummer Chad Smith and actor Will Ferrell went on The Tonight Show and did a drum battle. Both Chad and Will enjoyed it so much that they are thinking about putting together a music and comedy show, while also doing a drum battle with Metallica drummer Lars Ulrich. Each show would be benefiting a different charity. While there have been no details released yet, we are hoping that this happens. If you missed the original drum-off you can watch it here.