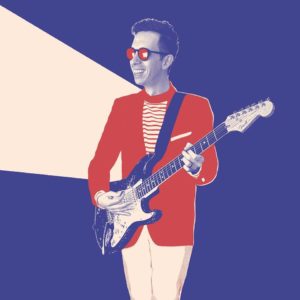 Nashville and Minneapolis based guitarist Cory Wong has teamed up with fellow guitarist Tom Misch for his new track “Cosmic Sans,” off of his upcoming LP Motivational Music For The Syncopated Soul, due out on August 2nd. Talking about working with Misch Wong says, “Tom and I have been aware of each other’s music for quite a while but hadn’t had a chance to interact until he was hanging in L.A. for a week doing some writing and creative exploration. We hung out just as a couple of guitar players who wanted to jam. I had a couple chord progressions and grooves I was messing with the day before, so we started jamming on it over a drum loop. We put a song form together and recorded it. I took the guitar parts and started putting some of my production on it; adding other instruments and shaping the sound; and it turned out to be a real banger!“