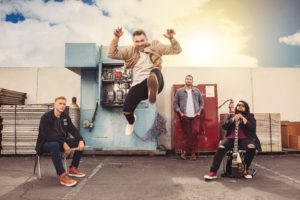 Crane has released the music video for their new single “Bitches Upstate” which you can check out below.

The video’s director Kerry Porter commented on the videos unique vibe by saying, “Our idea behind the ‘Bitches Upstate’ video is much different than the approach we took on our debut single, ‘Fast Life’, as we definitely took a darker approach on this one. The song is really about the struggles of being able to remain faithful and even be fully emotionally involved in relationships of today’s times, so the video represents the dark qualities of us and how many people string hearts along while never making their own heart vulnerable in order to avoid the awful feeling of heartbreak. We definitely had a lot of fun shooting this as the band came up with the video concept and storyline, frontman Bobby Crane built/designed the set props, and the same director we used for our first music video was behind the camera as well!”