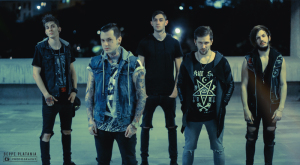 Italian metal band Cry Excess will be releasing their new album Ambition Is The S*** on January 6th. The band has also announced tours in Russia and Japan. You can see the press release announcing both the record and shows below.

Italian metalcore outfit Cry Excess have recently signed with Luxor Records (As They Sleep, It Lies Within) and will release their brand new album, entitled Ambition Is The S***, January 6th. The new album will be the follow up to the band’s 2013 This Is Core Records’ The Deceit and follows in the footsteps of their supporting dates with the likes of Walls Of Jericho, Miss May I, Heart Of A Coward, and Attila. Ambition Is The S***showcases ten tracks that fuses metalcore, death metal, nu-metal, and heavy groove sections into a hard hitting album that has already gotten fans into a frenzy. The album is currently available to be preordered from iTunes with all preorder purchases getting three tracks immediately after purchasing.

Cry Excess has also announced two tours to kick 2015 off with, the first being in Japan before hitting the road in Russia. The first tour is a solo run begins January 19th in Shinjuku, Tokyo and funs five days and ending January 24th in Chiyoda, Tokyo. The Russian tour begins shortly thereafter on January 29th before ending February 8th in Moscow. Cry Excess will be supported by Burden Is Burning and As Mercy Comes on the Russian set off dates. The band is expected to continue touring throughout Europe during 2015 while also planning to hit the United States as well. Fans can expect more dates to be announced as they are finalized.