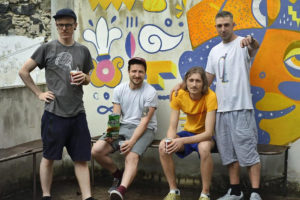 Math rock band Delta Sleep has dropped their new single “Single File,” which you can listen to below. The track will appear on the group’s upcoming record Ghost City, out August 10th on Big Scary Monsters. Talking about the writing and recording of the record, guitarist Devin Yuceil and bassist Dave Jackson say, “We figured it was the same price to record in Italy, so we brought our friend and producer Mark Roberts along for the ride. We booked a bunch of shows on the way down which pretty much covered our recording costs, which also meant that we had around a week of playing the new material everyday leading to the studio, a luxury we don’t often have.”

“This album feels like a snapshot of where the songs were at that time.You can even hear little blemishes throughout, which we love – chatter in between takes, us fucking around and generally having fun. A couple of the tracks were even improvised on the day, we’d never played them before, liked the vibe and they made it onto the album. We’ve also sprinkled in some field recordings from our time spent in Japan and Mexico.”