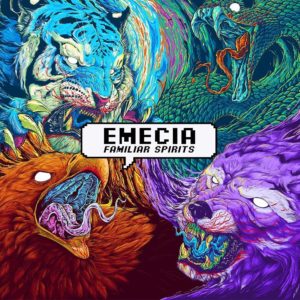 Releasing their debut EP Pariah in 2014, Adelaide, Australia hardcore band Emecia has dropped their full length album Familiar Spirits, a heart stopping record that has led the five piece to share the stage with groups such as Blessthefall, From Moths To Flames, and The Color Morale. With songs such as “Deathsinger,” front man and vocalist Scott Middlin hits listeners right in the gut with his screaming vocals and edgy performance. While his voice may take awhile to get used to if you are not familiar with the hardcore genre, the rest of the group sweeps listeners off their feet, with their brain lodging riffs and a seemingly innate sense of what works musically in a song.

Tracks such as “Even If It Kills Us,” shows off the ability of guitarists Trevor Lehmann and Marty Ainscow, performing intricate riffs, perfectly in sync with each other, that fit in perfectly with bassist Jake Gaston, and drummer Peter Beveridge. With energetic performances all throughout, the rhythm section shows off their chops and gives their fans a good idea of how they connect with fans during live shows.

Closing with the powerful song “Victims,” Emecia takes their listeners on one last go around with their fast, harried, and tough sound, firmly planting themselves as upstarts to look at in the Australian hardcore scene. With so much to offer with their music, it is only a matter of time for a group like Emecia make their way to the United States and crush it.