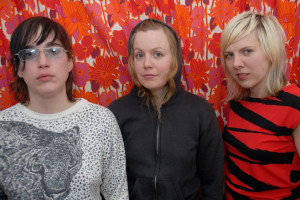 Erase Errata have announced their final shows before calling it quits. The band released their final album Lost Weekend earlier this year. A statement from the band can be read below.

It’s with mixed emotions that I announce that Ellie, Bianca, and I have decided to call it quits on this project after 16 mind blowing years. The final Erase Errata shows will be in Austin and Houston, Texas on October 16 and 17, 2015. I want to thank Ellie, Bianca, and Sara for changing my life forever, and to thank everyone who came to our shows and bought records, all of our support team (Scott Comeau, Maya Pedersen, Lindsay B. and many others), our auxiliary guest players Christina Files, Weasel Walter, Kim Gordon, Archie McKay, Jaél Navas García, Collin Dupuis, Eric Bauer, and others, plus Troubleman Unlimited, Kill Rock Stars, Dim Mak, WEA, Mute/Blast First, Sonic Youth, Le Tigre, Melt Banana, Aislers Set, Damo Suzuki, The Fall, Pansy Division, Bratmobile, The Gossip, Luke Tweedy, Norm Druce, all of the promoters world-wide who put on shows for us and YOU. So grateful. Thank you. Who knew an awkward little butch from Freeport, Texas would end up performing in Japan, Australia, New Zealand, and Europe in addition to North America? Not me! What a ride. So grateful. ❤‼