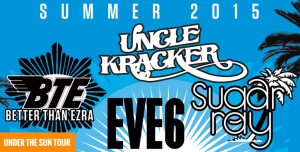 Sugar Ray front man Mark McGrath has revealed that the band will be taking part in the Under The Sun Tour along with Eve 6, Better Than Ezra, and Uncle Kracker. You can find the dates below. You can find more information at the tour’s official site.