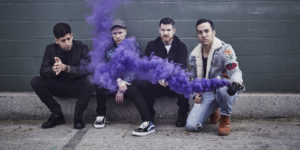 Fall Out Boy will be releasing their new album M A N I A on September 15th via Island Records and DCD2. The band has also released the records lead single “Young and Menace” as well as a music video for the track. For fans who are waiting to see the group live, they have also announced a headlining tour set for this fall beginning on October 20th in Cleveland, Ohio at Quicken Loans Arena. You can see the rest of the dates below.