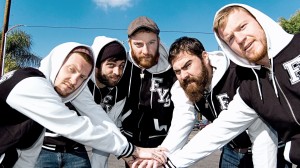 Four Year Strong has dropped a new track titled “Nice To Know,” a song that is more pop-orientated. Definitely not what fans may expect, but its not a bad change. What do you think of the group’s new sound? Let us know if the comments below. The song will appear on the band’s upcoming record Some of You Will Like This//Some of You Won’t, due out September 8th.