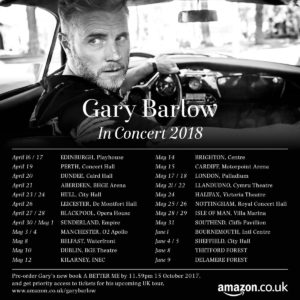 Gary Barlow of the band Take That will be heading out on a 2018 solo tour beginning on April 16th at The Playhouse in Edinburgh, Scotland. Barlow will also be releasing a new autobiography titled A Better Me, which you can pre-order at Amazon UK. If you pre-order Gary’s book, you will get priority access to tickets. A general sale will begin on October 20th.