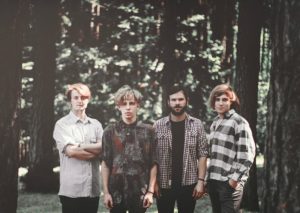 While Europe is booming with new music, the Czech Republic has a band just waiting to be heard. One of those bands is Ghost of You, who recently released their new album Black Yoga. Intertwining rock with electronic music is always an intriguing listen due to never know where the sound is going to go, though Ghost of You keep their listeners engaged from start to finish. Kicking off the short LP with the song “Recognizer,” the group incorporates pounding drums and electronic beats that starts the release highlighting diverse influences, including Queens of the Stone Age, Alt-J, and Cage the Elephant.

Tracks such as “Locust,” makes the band’s sound more varied, as it is backed by a hip-hop beat with by front man Tom Novohradský’s serene and beautiful voice fitting in seamlessly. While it’s not as much of a risk-taking tune as future numbers would end up being, “Locust” allows Black Yoga to slow down a bit and explore different sounds and emotions.

“Feast” is the EP’s sixth track and one that brings back the distinct sound Ghost of You is going for. With a scattered beat sitting beneath the mix with guitars and basses, the spacey elements bring “Feast” together, giving it an almost psychedelic texture. Ending with a “Rifle and a Spoon,” the groups entwine of styles makes for a unique musical journey, with potential to do well in other parts of the world.

Listen to “Recognizer” below.