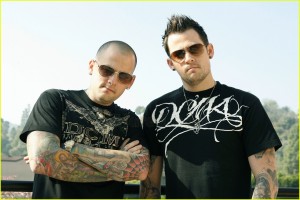 It looks like Benji and Joel Madden, the identical twin brothers that front the rock band Good Charlotte are finally setting themselves apart from their band and starting a side project. The new band will be called The Madden Brothers and will release their debut album Greetings From California… on October 7th. The lead single titled “We Are Done” will be out June 2nd along with the release of a lyric video to accompany the track.