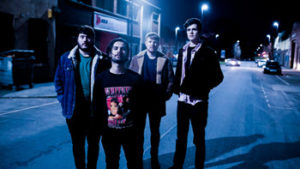 Rock band Graces has released the music video for their new single “Hotel,” which you can check out below. The Sheffield, England group had the following to say about the song.

“Hotel” is about restlessness, being scared of the future but also being willing to dive headfirst into it, without having a plan, direction or a home. It’s about asking someone to wake you up and take you with them in the hopes that somehow it will fix you regardless of where you may end up. It’s a homage to the classic Hollywood stories of two young people running away together, the kind of thing we see in films like ‘True Romance’. It is a pulsating 80s night drive song and an introduction to our world. The song was recorded at Fox Den Studios in Sheffield. It was a perfect place for us to record as it has the feeling of a little sanctuary that’s kept secret from the outside world. We record and produce all Graces material ourselves, meaning it was just us four working away on the song over the Christmas period last year. The vibe of the studio fits our writing style perfectly as it has a sense of being a secret lab you can hide away in and work tirelessly on something before you release it out into the ether.”