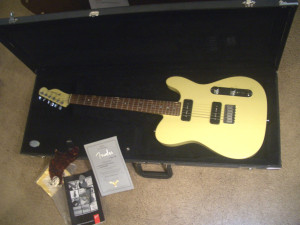 11 guitars once owned by late record producer Jerry Finn are now up on Ebay. Finn worked with many notable pop punk bands throughout his career including Blink 182 (Finn worked on the Blink 182 album Enema of the State.) He died in August of 2008 after suffering a cerebral hemorrhage followed by a heart attack. If you are interested in looking at the guitars or bidding on them you can do so here.