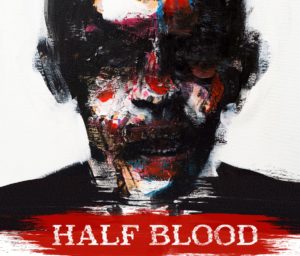 In 2014, Chilean metal band Half Blood was formed and while the group would spend several years finding their sound, they are releasing their self-titled debut today. A ten song LP full of thrashing and intense tunes that will blow the roof off each venue they perform in, Half Blood is not a release to miss if you are a fan of Slipknot, Gojira, Tool, and Mesuggah.

Opening with the track “Adamo’s,” the aspects that sticks out the most is front man and vocalist Manuel Castillo and drummer Pablo Abatte putting their entire selves into the song, letting their audience feel their intense passion for their music, something that comes up often on Half Blood. After a few seconds of silence, the band hits us with “Self-Exile,” a nearly three-minute-long track that could potentially be a single for the group. With blazing riffs that creates the songs appeal, “Self-Exile” is a number that fans won’t be forgetting. Guitarists Sebastian Aguilera and Ismael Gutierrez shine on this track, creating guitars that sound reminiscent of Pantera’s late front man and guitarist Dimebag Darryl.

Numbers such as “Forever,” demonstrates the bands more technical side of their genre as they play riffs and beats that require plenty of precision, something you hear often in metal. With double bass drums pounding in your ears throughout “Forever,” metal fans will eat up every note of the song. Closing with “G.T.F.A,” Half Blood is sure to make an impression on the metal scene in their homeland and elsewhere, as Half Blood proves the band is in music for the long haul.

Listen to “Self-Exile” below.