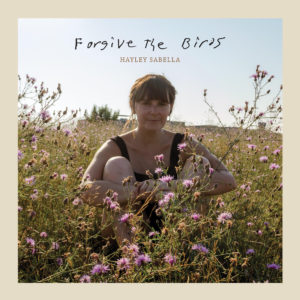 Releasing her new album Forgive the Birds on April 27th, New England singer-songwriter Hayley Sabella has released an honest and nature inspired record that makes us want to keep Sabella’s voice on constant repeat. Opening with the record’s title track, Sabella’s audience is reminded of ex Civil Wars member Joy Williams as her voice takes many twists and turns while remaining beautiful and soft. Working with Darlingside member and producer Harris Paseltiner, Sabella has written a stunning LP that will take her far, sucking you in for an emotional journey that you’ll want to expose everyone to.

Tracks such as “Father’s Clothes,” also has an acoustic feel to it and as Sabella’s delicate voice takes us away, we become further wrapped up in the music, with a light rock influence that is not to overwhelming, breaking out of the acoustic mold we thought she was going to have for the entirety of Forgive The Birds.

Tracks such as “Proud” make us believe that she is singing right to us, creating the effect of how an artist can get fans to completely focus on the music during live performances. The strings on this tune create a nice effect too, giving it an emotional pull that feels serene and comfortable, and as we sit down to listen, everyone that has not heard Sabella yet is missing out big time.

To end the 10-song effort, she tacks on “Love Is A Chisel” to end Forgive the Birds. A mesmerizing tune to close with, we hope Sabella finds success with Birds, wherever she happens to go next. For a second effort, it’s a strong one, and it gives her a great starting point to last a long time in the ever changing and fickle music industry.

Listen to Father’s Clothes” below.