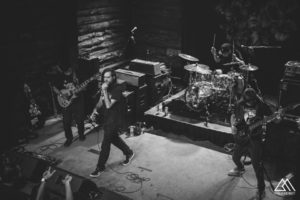 Austin, Texas band Hitting Subset has shared their latest track “Hikari” which was inspired by front man’s Caleb Behm’s dogs epileptic seizures. Commenting on the meaning, Behm says, ” I wrote this song about my dog, Zorro, who is epileptic since age two. This was after he had a particularly horrible cluster of seizures which nearly took his life. I would watch him get up every time with so much determination as he would re-learn how to walk and how to eat and drink and be a dog again. It really tore me up, but Zorro was always so resilient and happy in spite of it all. He acted almost as if there wasn’t this impending disease hanging over his life that he had to deal with every three or so months. As silly as it might sound, it inspired me through my personal depression to constantly search for the light, or the silver lining in everything that happens to me. There is always something to be happy about.”