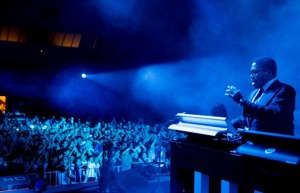 Isaiah Owens, keyboardist of the Mars Volta has died at the age of 38 while on tour in Mexico. In recent years, Owens has played keyboards for bands such as Mars Volta and Jack White, though he has played with countless bands. Drugs and alcohol were found in his room, though it is not known whether or not they played a role in his death. Jack White’s management has posted the following statement about Owens death.

“It is with great sadness that we tell the world of the passing of the incredible musician Isaiah “Ikey” Owens. He will be missed and loved forever by his family, friends, bandmates and fans. Ikey Owens was an astounding keyboard player in Jack White’s backing band. He also played with Mars Volta, Free Moral Agents, and many other projects. Out of respect for Ikey, the remaining shows of the Jack White Tour in Mexico have been cancelled. We will all miss you Ikey. You were and are an incredible artist.”