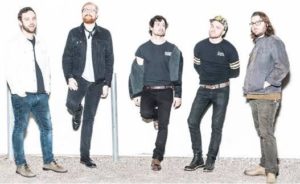 Arizona band Jared & The Mill has debuted their new song “Dying Fear” which you can listen to below. The group has also announced a tour, alongside an announcement that they will be working alongside Can’d Aid, a charity that works to spread “do goodery,” for every dollar sold from the tickets. On tour, the band will working with 10 schools where they will be donating instruments (those dates will be announced soon.)

Their new album This Story Is No Longer Available will be out on February 15th.