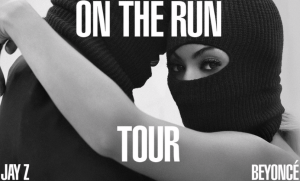 Jay Z’s and Beyonce’s On The Run Tour is set to be one of the highest grossing tours of all time. According to Forbes, the tour which will run for twenty dates, will gross $100,000,000. While that would not put the tour in the top 10 tours of all time, it would average out to $5,000,000 per venue making it the second highest tour based on those numbers. While there have been rumors circulating that the tour is not selling well, Forbes has put those rumors to rest.

Read the rest of the article at Consequence of Sound.