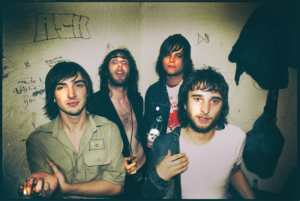 Australian band Jet will be heading out on a short anniversary tour celebrating the 15th anniversary of their debut album Get Born, released in 2003. The tour will begin on July 16th in Manchester, England at the O2 Ritz and wrap up on July 20th in Belfast, Ireland at Limelight. In addition to the tour, the band has put out a live album titled Get Born: Live At The Forum.