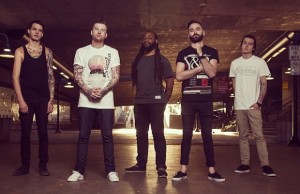 Jonathan Wolfe, who recently left his band Slaves, has posted a lengthy statement on Absolutepunk about why he left. You can read it below.

I was going to let this thread die out and not feed the fire, but a few friends sent me some screen caps of this thread as well as Lambgoat’s new posting today, and feel as if I’m at the point where I need to defend my integrity and reputation. I had originally planned on keeping quiet and sticking to the story that I was fed but after constant harassment and belittling, I couldn’t stand to keep quiet. I have to apologize in advanced to the wonderful people at Artery Foundation & Artery Records who assured me I was not in the wrong and helped me out of a sticky situation, I know this is bad press for them.

Before this tour began it started off with great vibes. Alex contacted me and was extremely enthusiastic. Asking me to basically be his right hand man. I was asked to assist in hiring personnel for the tour, open up our touring budget, splitting the tour management responsibilities with him & helping with song writing. He said he had always been looking for that one person to show initiative and to help him out because the rest of his band mates, and I quote “are way too lazy and unmotivated”. I gladly complied and offered my assets and aid in anyway possible. Heck, Tai Wright quit and I was asked to bring in a new drummer, which I did. Suddenly, he wanted back in more than ever. Shortly after his return into the band, the vibe began to change.

Soon after, I was bullied and threatened that if I didn’t burn my bridge with ESP Guitars (to which I am proudly endorsed) I would not be allowed permanent membership. I would need to throw away my “Guitar Center guitars” and play their Ernie Ball Musicmans if I were to be in any media relating to the band. Granted, I can understand their desire to portray a certain image, but when they asked me why I wouldn’t switch and my answer was, “I would really like to do that for you guys, but my loyalty towards the people that have taken care of me for years has to come first,” they really didn’t have grounds to be hostile after a civil response and call me a “stubborn douche”. I offered to speak to their artist representative at Ernie Ball to ensure they wouldn’t be reprimanded for my choice in instrument, but the band refused to let me.

I tried my best to be as positive and encouraging as possible no matter the overall vibe at rehearsals or in the van, but it quickly got to the point where I just kept my mouth shut and my head down. Every time I asked a question they’d respond in an annoyed tone and eye roll. I’m trying to learn their system and they refused to be cooperative.

They are correct, I was unable to help with lifting equipment. They were aware of this, they were the first people I contacted when I was in the emergency room after my accident. I contacted them before my own family and let them know that I was going to do everything in my power to not bail on them; that I’d be able to play the songs but would need to exercise some caution. I ended up having to go through one hell of a surgery just to make this happen. My clavicle was broken in three different places, it required an 8 inch incision, 6 inch plate and 8 screws to get put back together so that I could perform.

If the roles were reversed, I would have gladly carried said persons guitars up and set them up for them. I’ve more often than not unloaded and loaded an entire trailer by myself. I have several previous band mates that could vouch for this. This is the first time I have ever had to tour with an injury and it was stressful trying to figure out how to make myself useful. The day before I was ditched in Texas I finally figured out that I could set up their entire live rig (we don’t use amps) and even that wasn’t good enough for them because it was just “Five cables and a microphone”.

Alex Lyman claims they spent 30 minutes attempting to get into contact with me, and that they didn’t know where I was they day I was ditched. At several points during the day I let them know I was in the next green room over, so they certainly had a good idea where I was hanging out. Additionally, the conversation linked below clearly shows that there is only an eight minute difference between the initial text telling me they were leaving and my response; there were no phone calls made and no effort to wait to hear back from me. Also, the freeway they were on took exactly twelve minutes to get to, meaning they sent that text message after they had already left.

The fact that they are trying to use my past experiences with other bands against me is unfair. No one knows the details of these situation and I won’t be throwing anyone under the bus today. All I can say is I quit Dayshell and I get along with everyone in the Falling in Reverse camp, they were actually professional and took good care of me throughout the Black Mass tour.

—
Bottom line, this entire situation was handled poorly. I really thought I knew my role and I played it to the best of my ability. If the “bad vibe” came from anyone, it came from them. Nearly every time I tried to make conversation, joke around, or connect with the band, they’d roll their eyes and make condescending comments. Anything “annoying” I said was unintentional; I can’t really help my personality and it’s disappointing they couldn’t be more patient, accepting or professional about that. In life we all have to learn how to treat people with all kinds of personalities with respect. I’m bummed that I couldn’t help everyone else with the manual labor, but I will say that my performance was, without a doubt, up to par. Additionally, I have yet to be fully paid for my time with them and I have clothing missing that they are refusing to return or compensate me for.

I originally planned on moving to Seattle, WA in April, but drained my bank account by moving early (I wasn’t able to take adequate time shipping items in a financially responsible way, and also didn’t have as much time to look for the best housing situation possible) in order to both do the tour and also move on time. Also, my surgery was not mandatory; the surgery merely functions to make the healing process go a few weeks faster. I only endured surgery so that I could complete the tour with the band. These past couple of weeks have been absolute hell for me. After being fired, I had to buy a car because the transmission in my old car died, I then had to drive from Las Vegas to California, to Washington. All I’m trying to do at this point is pick up the pieces, defend my reputation, and move forward with my life.

I believe I made a some pretty huge sacrifices on my end in order to help the band out, and in return was treated with total disrespect. To be clear, I never submitted anything about the situation to anyone; my intention was never to “run to the internet.” I made a sarcastic Facebook status – that I always planned to delete – which was only viewable to my friends, that someone else shared. Perhaps it wasn’t the best decision to share anything at all, but we have ALL experienced some really shitty moment that we just needed to get off of our chests to feel better.

I want to apologize to anyone in the industry that this may have affected negatively. And although I am bitter, I wish Slaves a safe return home to their loved ones.