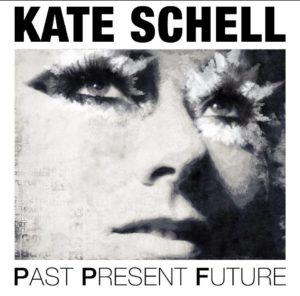 On Past Present Future, Chicago based vocalist Kate Schell has dropped an album full of experiences from the past 10 plus years of life while figuring out the next step in her career. Beginning her music career at the age of six when she began taking piano lessons, she released her debut album Emptier Streets in 2005. After fronting the Chicago band Paper Thick Walls, Schell turned to a solo career where she now performs folk-electronic music.

Opening Past Present and Future with the track “Darkroom,” new listeners are introduced to Schell’s wispy and delicate voice, reminiscent of Sara McLachlan. With a relaxed feeling, Schell takes her audience away and brings them into her own world as we experience the almost magical sound of “Darkroom.” Numbers such as “Shoeboxes” are up next, the bridging of electronic and folk takes on an interesting tone here, with each genre aligning perfectly, as we wondered just how a mash up of folk and electronic music would work before listening to Past Present Future in full.

With tunes such as “Salt,” we finally hear a bouncier tune as Schell leans more towards her electronic influences on this song. While the track isn’t exactly a dance banger, “Salt” works among the more melancholy and slower tracks on Past Present Future. As the LP’s fifth track, it also breaks up the monotony of the first half of the album with more relaxed tones.

Closing with “You and Your Shadow,” Kate Schell presents an album that demonstrates her natural talent and her penchant for writing adventuresome tracks that allow her audience to know exactly where she was in life when writing each track. While Schell is known throughout the Chicago music scene, we hope she can soon break out of that bubble and introduce her music to a wider audience elsewhere.

Listen to “Salt” below.