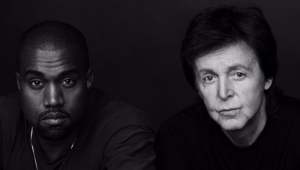 A day after the release of the song “FourFiveSeconds” which features Kanye West, Paul McCartney, and Rihanna, it has been revealed that McCartney has produced Kanye’s entire album. A title has not been released, though the trio’s latest track will appear on both Kanye and Rihanna’s new records.

If you missed the premiere of “FourFiveSeconds” you can take a listen to it over at Rihanna’s website.