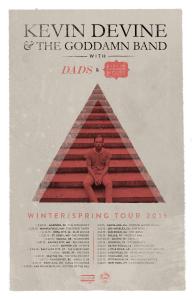 Kevin Devine has announced a tour with Dads and Field Mouse. You can see the dates below.