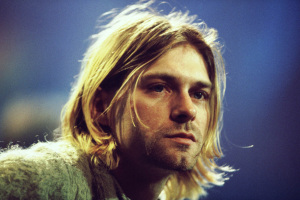 A new documentary on the late Nirvana frontman Kurt Cobain will air on HBO in 2015. It will be called Montage of Heck, and will have full participation of his family members, including his daughter Francis Bean, who is the film’s executive producer. The film’s team were given access to Cobain’s personal archives, and the film will feature Nirvana performance footage, unreleased songs and home movies, photography, journals, song books, and demos. The movie does not have a release date.