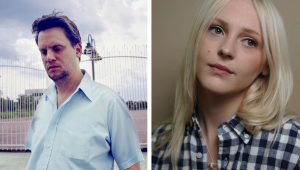 The current issue of UK magazine Mojo includes a Led Zeppelin tribute album featuring covers from the bands album Physical Graffiti. Two covers from the tribute album have been released. They are “Sick Again” by Sun Kil Moon’s Mark Kozelek and “Bron-Yr-Aur” by Laura Marling which is an instrumental. You can listen to “Sick Again” here and “Bron-Yr-Aur” below.