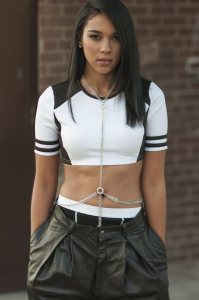 Last month, Lifetime lost the actress who was to play Aaliyah in an upcoming movie on the singer called Aaliyah: Princess of R&B.  Zendaya Coleman, 17, was set to play the late singer but pulled out of the production after Aaliyah’s estate criticized the film. Now 23 year old Alexandra Shipp will replace Coleman once filming picks back up this summer.