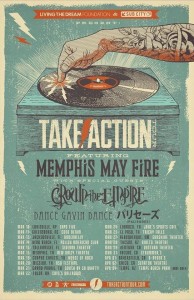 Memphis May Fire, Crown The Empire, Dance Gavin Dance, and Palisades has been announced as the lineup of the 2015 Take Action tour. You can see the dates below.