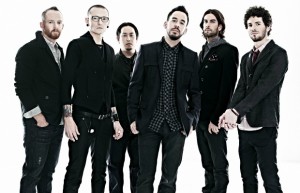 Linkin Park has released a live music video of guitarist Brad Delsen and late singer Chester Bennington singing an acoustic version of the song “Sharp Edges” from their last tour earlier this year. The performance is included on the band’s upcoming live album One More Light Live, which comes out today. Bennington passed away in July, and this release will be the final album with all six of Linkin Park’s members.