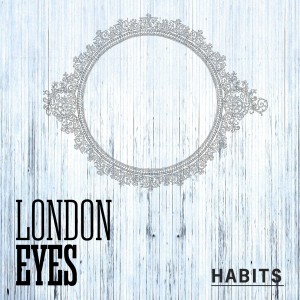 Habits, the latest EP from Danbury, Connecticut rock band London Eyes, is a lively EP that fuses pop punk with a hard rock sound that is reminiscent of Versa’s debut album Fixed At Zero released in 2010. Front woman Georgia Pimentel introduces us to the band’s music through the opening track “Moving Bodies” through her strong and bold voice. As her voice soars throughout the song, guitarist Thomas Guardado plays punchy riffs that provide a great backdrop for Georgia’s vocals. “My High” the EP’s next track, is a gorgeous ballad that has the band abandoning their thrashing brand of rock, and slow things down a bit to provide fans with a bit of breather.

Coupled with pretty strings, Guardado’s addictive guitar riff played throughout most of the song, gives the tune an emotional weight that we weren’t expecting from the band. While the group returns to their powerhouse sound about half way through, with Matt Carlson joining in on backing vocals, the song is a strong option to play at live shows, as it allows fans to lose themselves in the track as it wraps listeners up, and becomes emotionally stirring. Habits closing cut “All We’ve Got” is a catchy tune that might remind listeners of bands such as Quietdrive or Tonight Alive, due to their energetic sense of performing, in addition to musical abilities.

As the EP ends, London Eyes have put out a strong release that alternative music fans will love and appreciate, and for everyone else, we love that the appearance of a female vocalist in a rock band has made a comeback in the music scene, as the absence of female vocalists have been felt for a long time.