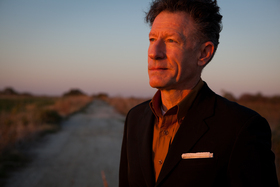 Lyle Lovett and Vince Gill have announced a 13 city tour called Songs and Stories. You can see the dates below.