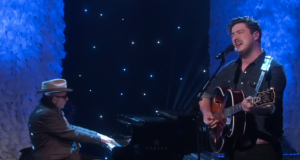 Continuing their run of performing on television shows as The New Basement Tapes, Marcus Mumford, Jim James, and Elvis Costello appeared on The Ellen Show to perform more tracks off of their new collaborative Bob Dylan album Lost On The River: The New Basement Tapes. This time the group performed “Kansas City” with Mumford serving as frontman for the performance. You can watch the performance here.

The group will be performing on Live on Jimmy Kimmel next week on the 19th, with a Sam Jones directed documentary about the album’s creation airing November 21st on Showtime.