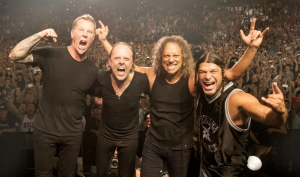 According to their biographers, Paul Brannigan and Ian Winwood, Metallica are in massive debt after a few disastrous financial decisions. In a recent interview with Weeklings, the two writers have claimed that “Metallica have lost more money than they’ve made” since 2010. Both parts of the bands Orion Music + More Festival were financially disastrous, and the bands most recent film Through The Never ended up costing the band $32 million.