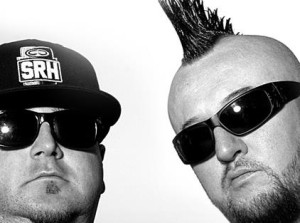 Moonshine Bandits have released a music video for the song “Outback.” You can read a press release about the video below.

Moonshine Bandits are back with a brand new video for their latest single “Outback” off their new album “Blacked Out”. The rowdy late summer anthem is perfect for kicking back by a bonfire or cruising around town with the windows down. The duo keep things fresh with a sound uniquely their own. The video can be seen online at https://youtu.be/deuTH8-LtWs and features guest appearances by the entire country rap scene including Bubba Sparxxx, The Lacs, Sarah Ross, Jawga Boyz, Moccasin Creek, Lenny Cooper, Demun Jones from Rehab, and Redneck Souljers.

“This song and music video is history in the making. We are proud that we were able to unite artists from all over the United States to appear on this song or even just stop by to make a cameo in the music video,” commented Big Tex from the Moonshine Bandits about the video. “Some of our buddies could not appear on the song and that was due to scheduling conflicts, but we want to thank everyone that was able to take part in this monumental moment. We hope that this song and video will continue to break down barriers and allow our movement to proceed. Maybe artists down the road will benefit from the doors that we are kicking down today.”

“Major props to Tex and Bird of the Moonshine Bandits for bringing basically the entire Country rap scene together for this song/video shoot,” commented D-Thash from Jawga Boyz. “The day that we spent filming this music video, will be a day I’ll never forget. I truly believe mad a video that the fans will never get tired of watching. Everyone’s favorite artist is in there somewhere, and it’s something our Jawga Boyz nation is gonna love! Huge thanks again to the Bandits, for making this happen!”

Lenny Cooper added, “I’m honored to be a part of this song and video. I had a great time filming ‘Outback’ with Moonshine Bandits and everyone. It was a good time as always!”

“Blacked Out” is the most adventurous Moonshine Bandits album ever and they were rewarded when the album debuted inside the Top 15 on Billboard’s Country Albums chart at #13, cracked the Billboard Top 200, and simultaneously debuted in the top 10 on the Rap Chart. With its crunchy guitar riffs and southern rock swagger, “Blacked Out” is a soundtrack to the real lives of Bird and Tex. Their friendship was forged in all-night keg parties deep in the country; their music grew from what they’d experienced together as restless young men who refuse to apologize for their patriotism, who value family and freedom and above all who feel the calling to celebrate those many Americans who share their beliefs.

The Moonshine Bandits are currently on the road on their “Blacked Out” headlining tour with country rapper Jelly Roll, Crucifix, and California outlaw rapper Pruno throughout August.