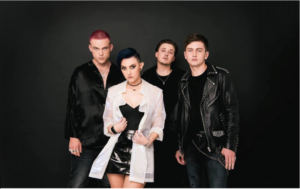 New Zealand pop band Openside has released the music video for “No Going Back,” which recently premiered on Alternative Press. Talking about the song front woman Possum says, “We wanted [the song] to feel both mournful and triumphant, the way that you do when you’re closing one chapter of your life and starting another, so we were inspired by lots of epic 80’s and 90’s power ballads.”