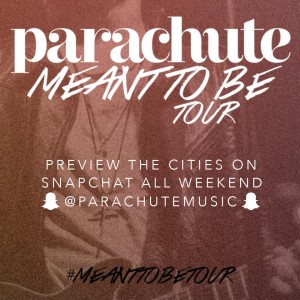 Parachute have announced their upcoming tour which is called the Meant To Be Tour. The band posted the following information on their Facebook page.

TOUR ANNOUNCEMENT: We are beyond excited to announce the Meant to Be Tour from 8/27- 10/4.

Exact venues and dates will be announced on Tuesday, but all weekend we will be previewing the cities we’re visiting on Snapchat. Add @parachutemusic and we’ll update our story with new cities at noon every day, and keep an eye out for contests all week leading up to the tickets and VIP experiences going on sale.

The first five cities are up on Snapchat now, so make an account and check them out!