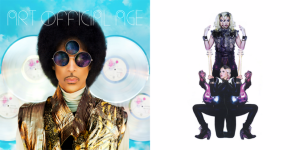 Prince will be releasing two new albums on September 30th called Art Official Age and Plectrumelectrum. Preorders for the album are now available at Prince’s website and will include a flyaway trip to a special Prince show at Paisley Park in Minnesota in October.

Shortly after the release of his new material he will also be releasing a 30th anniversary edition of his album Purple Rain.