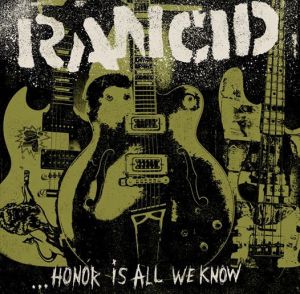 Honor Is All We Know is the first album in five years for Bay Area punk band Rancid, and it is one of the best albums the band has released in their nearly twenty-five year career. Originally set to be released in 2012, the album kept being pushed back due to touring commitments and guitarist Tim Armstrong continuing to write more songs to include on the record. Now that the band has taken the time to craft an album that really represents them as a whole, we are hearing a lot of the same style and influence that we have heard throughout their career, including hints of reggae, which was a staple on their albums Life Won’t Wait (1998) and …And Out Come The Wolves (1995.) While punk rock has branched out to have a more pop influenced sound throughout the past decade, Rancid has kept their sound very authentic, and have stayed true to their punk roots leading them to have a sound that is unique to them.

Honor… opens up with “Back Where I Belong” a fast anthem that is a reminder of older tunes on the group’s albums such as Let’s Go (1992) that really embrace the punk genre, while reassuring long time fans that Rancid haven’t lost their edge. Branden Steineckert, the band’s drummer since 2006, does an excellent job at leading his band behind the drums, and even though this is only his second album with the band, it sounds like he has been playing with the group right from the beginning.  “Honor Is All We Know”, the album’s title track, has the classic Rancid sound, with biting guitar riffs, mixed with melodic guitar parts that demonstrate that Rancid aren’t just interested in demonstrating their playing abilities, but that they also want to keep things musical.

The albums closing track “Grave Digger” has guitarist Tim Armstrong taking over lead vocals with his strained and raspy voice, with the rest of the band taking over backing vocals, making the song have a grittier and punchier sound. The song which features some of bassist Matt Freeman’s typical whirlwind bass lines is a great album closer, as it offers fans one last shot of energy, something Rancid has always been good at when ending their records. Among all of their releases Honor Is All We Know goes down as one of the bands best, since they haven’t stretched their sound too far, and every fan will be able to get something from the record, regardless of whether they have been a fan since the beginning or if they have become a fan more recently.

Honor Is All We Know comes out today.