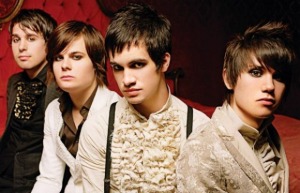 Last week, Ryan Ross’ manager Shane Morris, tweeted several tweets stating that the former Panic! At The Disco bassist should start working with the band again. In response, the Twitter hashtag #RyanandBrendonOneMoreSong was started and hasn’t let up since. After the hashtag started, Ryan tweeted “not against it” with the hashtag included in the tweet.

Ryan recorded two albums with Panic! At The Disco which were A Fever You Can’t Sweat Out and Pretty Odd. After his departure from the band, he started the group Young Veins who recorded one record called Take A Vacation! before breaking up.

You can see the tweets that were posted over at Alternative Press.