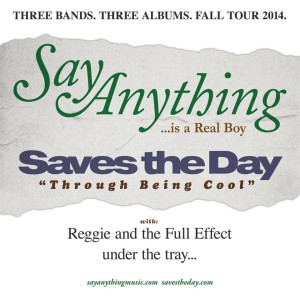 “We can’t SAY ANYTHING about it.” That was our response when anyone asked us about details of our upcoming tour. We hope you picked up the clues. If not, we’re now showing you the answers that were always waiting in the back of the book. Are the rumors true? Yes. We’re going on tour with Say Anything, Reggie and the Full Effect, and we’re rippin THROUGH BEING COOL from front to back.

All summer long, we were chillin and rippin on the Vans Warped Tour, meeting so many of you, making new friends, and just having a blast. We never wanted it to end. Thirty minutes a day isn’t enough. And now, we’re coming back around to play TBC and more. We’re fully psyched!

THROUGH BEING COOL is 15 years young. Picture a 15-year-old kid who just got a learner’s permit, and the waves of glee they experience when they first put the car in drive. That’s gonna be us every night. Buckle up.

And yet, for the sum total years between the three bands, this is new. No one’s done it the way we’re doing this now. Every night: three bands, three albums. Full Bananas.

Always and forever right by your side,